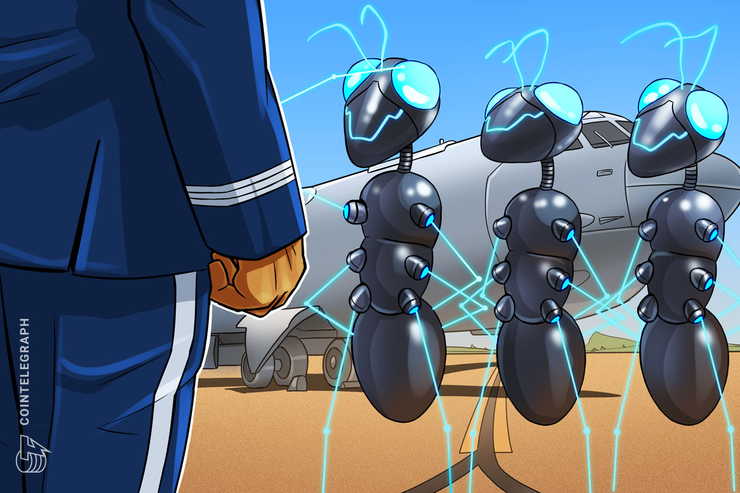 When Indian Defense Minister Rajnath Singh said that blockchain and artificial intelligence would “revolutionize war,” as Cointelegraph reported on Nov. 4, did he take things a bit too far? Jet engines have revolutionized warfare, and so have missiles and nuclear weapons — but shared digital ledgers?

Former NATO Secretary General Anders Fogh Rasmussen, for one, told Cointelegraph that he agrees with India’s minister when he was asked about blockchain’s possible military uses:

“Yes, potentially. Digital technologies have been transforming warfare since the 1990’s so emerging technologies such as blockchain have the potential to define the war industry over the coming decades. Data and data sharing will be critical for warfare in the future, particularly with the development of artificial intelligence.”

“Sharing data is fundamentally about transactions. Securing and sharing the right data in the right order between the right parties (computers, machines, defence agencies, and among allies) is critical in modern militaries and will only grow in importance in the future.”

Blockchain technology will be critical in defending key weapons systems as well as validating orders and battlefield information, among other uses. This is according to what Victoria Adams, the government practice lead for ConsenSys in Washington, D.C., told Cointelegraph. She added that the Indian minister’s remarks regarding blockchain “may have been a bit of a stretch,” but that AI, by comparison, is going to “revolutionize everything.”

Managing logistics and military supply chains will be a particular challenge, Adams said — especially as these become more privatized and complex with the addition of additive manufacturing (i.e., 3D printing). If the U.S. Marine Corps is going to put 3D printers in the field so that soldiers can manufacture spare parts on-site for F-35s, say, then it needs to protect these workstations from hackers — especially the digital specifications — Adams said.

“The Pentagon has said it doesn’t want a single point attack vector,” Joel Neidig — CEO of Simba Chain, a smart contract startup working with the U.S. Air Force to provide a blockchain-based platform to secure the supply chain — told Cointelegraph. And this is where blockchain technology, with its thousands of nodes, can indeed be of help.

If the supply chain is on a blockchain, one’s adversaries can no longer gain illicit entry through a single node or a single computer. According to Neidig, “They will have to take the whole network down, which isn’t so easy to do. Just think how resilient Bitcoin has been over the past 11 years. No one has been able to hack it.”

The Department of Defense, and other U.S. security agencies, still doesn’t appear to have a clear, integrated strategy for incorporating blockchain into their operations, though use cases appear to be emerging piecemeal.

In September, for instance, the Department of Homeland Security awarded $143,478 to Vienna-based firm Danube Tech to develop blockchain security solutions, including digital documents like passports and green cards to be used at border crossings or in airports.

But according to what Markus Sabadello, the CEO of Danube Tech, told Cointelegraph, it isn’t far-fetched to see how a military organization could issue a digital identity for all its soldiers to establish their credentials, including their rank. Commanders could send orders through the decentralized digital network, and soldiers could verify who the message came from. The enemy would find it difficult to forge false identities, as all of them are registered on a blockchain, and there would be no one central server that the enemy could hack.

“One application that has been discussed is a so-called secure multi-party computation (MPC) which can be combined with blockchain so that a number of people can input information while keeping their individual inputs private. This is being discussed in the context of arms reduction and oversight agreements.”

It all isn’t happening fast enough, though, in Adams’ view. “You go to defense conferences, and you speak about this, and you get a lot of blank stares.” Yes, there are military blockchain initiatives in the works, “but they are all pilots, testing, getting the face wet — no energetic response.” Adams continued:

“I don’t see a strong vibe from the NATO countries. By comparison, Russia, and China’s People’s Liberation Army have shown that they get this.”

Several countries are making developments in this area.

According to Deloitte’s 2019 Insight Global Blockchain Survey, China — more than any other country — will use blockchain “strategically instead of tactically,” according to Paul Sin, consulting partner at Deloitte Advisory. Moreover, 34% of Chinese respondents in the 2019 survey strongly believe in the disruptive potential of blockchain, more than most countries in the survey.

Elsewhere, statements from China’s People’s Liberation Army have caused some concern in the West. In a 2018 article, the PLA described how the technology behind Bitcoin could have military applications, including in its intelligence operations and in protecting weapon life-cycle data from cyberattacks.

According to Jahara W. Matisek, assistant professor of military and strategic studies at the U.S. Air Force Academy, the journal article was written specifically as a call to action. He quoted the PLA directly in his article in the journal National Interest, which said, “If we do not take precautions in keeping with the pace of the times, we will be subject to control everywhere.” Matisek commented on the quote:

“The PLA seems to recognize the importance of this emerging technological capability, but should China be allowed to control the future of information warfare?”

More than two years ago, the Russian news service Tass announced that blockchain technology might soon be introduced into the Russian military, but noted: “We should be cautious when approaching new technologies, study them in detail because they always carry not only new advantages but also new unknown risks and threats.”

In 2018, the Russian Defense Ministry announced it was launching a new research lab to study how blockchain could thwart cyberattacks. It hoped to build secure blockchain-based platforms to make it more difficult to hide traces of cyberattacks and track online intruders into its systems, according to Adams.

In April, South Korea’s defense department announced a blockchain pilot program to prevent external tampering with its military supply chain. Kim Tae-gon, coordinator of the National Defense Agency, called blockchain technology “one of the core technologies of the 4th Industrial Revolution.” He added:

“The history of the entire process from bidding, evaluation, and results for defense improvement projects will be recorded on the blockchain, enabling more transparent management of the company selection process.”

India’s defense industry is undergoing “a churning to cope and employ these technologies, in order to safeguard the safety and security of critical infrastructure,” according to Defense Minister Rajnath Singh on Nov. 3, as reported by the Times of India.

Meanwhile, scholars in India are concerned about blockchain supporting the conduct of military operations. According to Global Security Review, “With one author recognizing that as governments and individuals develop quantum computing abilities, blockchain will make it easy to hack into highly secure networks.”

The U.S. Department of Defense — somewhat belatedly, perhaps — is recognizing the benefits of blockchain technology for national defense, noting in its July Digital Modernization Strategy 2019 report that its Defense Advanced Research Projects Agency, or DARPA, will study the technology. The report states:

“DARPA is starting to experiment with blockchain to create a more efficient, robust, and secure platform using a blockchain protocol that will allow personnel from anywhere to transmit secure messages or process transactions that can be traced through numerous channels of a decentralized ledger.”

But many of the use cases noted above appear to be individual initiatives of departments or services sectors (e.g., the U.S. Air Force), and these are early in the developmental process. The U.S. DHS initiative with Danube Tech, for instance, is still in its pilot stage, and Simba Chain’s project with the U.S. Air Force only recently passed into phase two. It will be several years before a solution will be implemented at scale, Neidig told Cointelegraph.

NATO, as a political and military organization, needs to find ways of increasing investment across the alliance, as well as to cooperate more closely to develop new technologies like blockchain and AI, Rasmussen explained to Cointelegraph, adding:

“We often hear President Trump talk of the need for NATO allies to spend 2 percent of GNI on defense. This was a target agreed at my last NATO summit. But we also should focus on another target – 20 percent – which is the amount that NATO allies should spend on equipment and R&D. I believe we should raise this to 30 percent across the whole alliance.”

If Darpa can’t figure it out, who can?

Not all concede that blockchain will revolutionize — or even impact — warfare in any meaningful way. DARPA, the DoD’s visionary agency, is supposed to anticipate the future, after all, whether it be the internet, driverless cars or the autonomous battlefield.

On Nov. 19, 2019, DARPA issued a request for information on distributed consensus protocols to see how this technology might improve security, storage and computing in the Defense Department. According to C4ISRNET: Media for the Intelligence Age Military, such a request is “almost an indictment of the technology itself. If DARPA can’t figure out a responsible, value-generating use for blockchain, who can?”

It won’t be easy to introduce decentralization (i.e., blockchain) into top-down, heavily centralized military organizations. Some military minds may be hesitant to give up control, even if the U.S. military has been encouraging more bottom-up initiatives in recent years. “Yes, it’s a problem,” Adams said. “You gain control by giving up control. It’s hard to do. It requires a big cultural change.”

Overall, the development of blockchain technology is part of a wider picture about who cracks the next generation of technology — from applications like blockchain through to artificial intelligence — former NATO Secretary General Rasmussen told Cointelegraph:

“It is an area I’ve been working on in recent months as I firmly believe the world’s democracies must win this race.”

If that is to happen, a more robust and integrated stance from the U.S. and its allies might be in order.

Istanbul Hard Fork for Ethereum 2.0 Will Be Released in First Week of December