Tron’s accelerator competition closed on 4 January with $1 million in prize money to be won, but now dapp developers are up in arms, if the outpouring of complaints on the discord channel are anything to go by.

The project is led by Justin Sun and has recently been gaining traction both in terms of adoption and price.

But all may not be what it seems at first glance say its many doubters.

It stands accused by of pumping the price of its token – TRX – by luring devs onto its platform, especially from Ethereum, under false pretences with its generous competition prizes in its accelerator programme.

He drew attention to the email that has been sent out to entrants changing the rules after the competition had closed:

Due to the unexpectedly high volume of competitive projects, we have made some adjustments to the prize structure, one of them is to award over 100+ projects instead of 56 projects. More details to be announced soon. Please stay tuned:)

And one poster on discord (phil) apparently representing a Super Representative (a node on Tron’s delegated Proof of Stake consensus system) complained about the cut in the minimum prize size from $5,000 to $1,000, casting doubt on whether the prize money would be fully distributed: 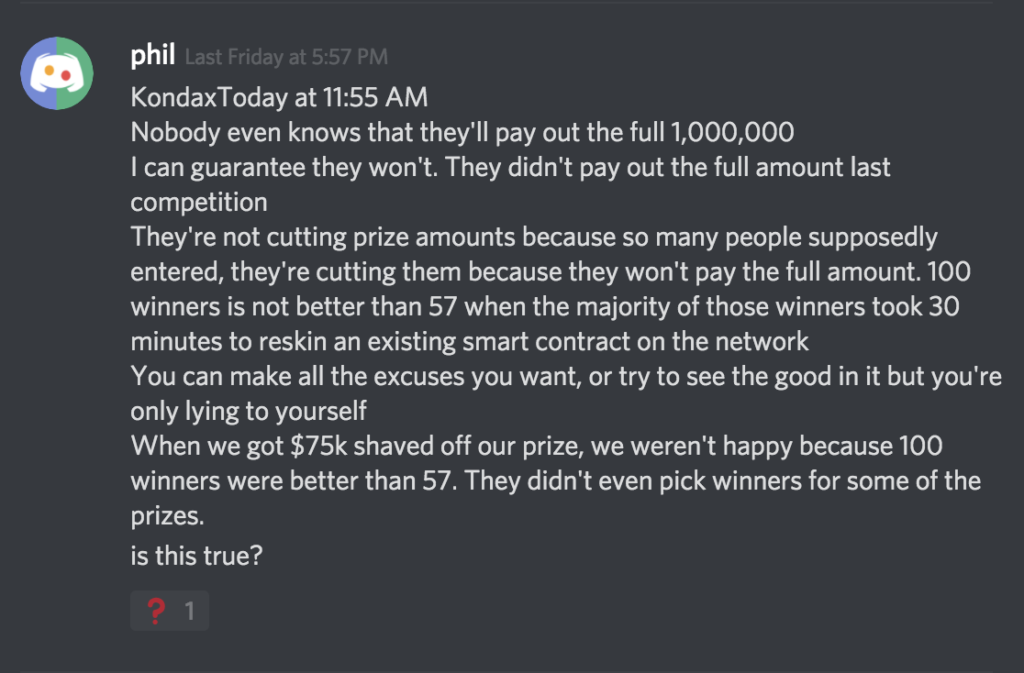 And here’s the full charge sheet drawn up by 9hil:

Devs complaining on discord about the accelerator competition. Prizes being reduced, clones winning, no pubic announcement of winners, non-mainnet dapps winning despite rules. Any comment? Wait for nitron2019?

Within 10 minutes he popped up on the discord channel, promising to release a statement in an hour.

Here’s the screenshot of the discord interaction: 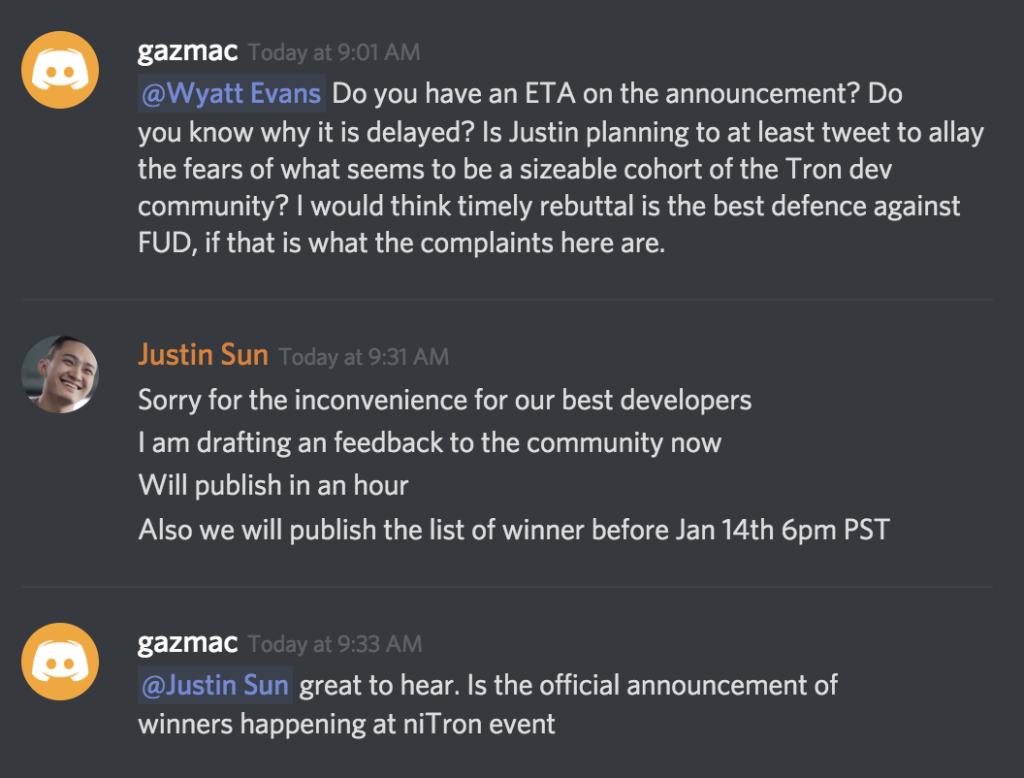 This story is unfolding as I write but to be fair to Justin Sun he is responding to developer complaints.

For example the anthill dapp which is a clone of Shrimp Farm (described by 9hil as a ponzi game), which in turn is a clone of the original Ethereum game, is no longer in line for a prize.

Sun explained at 9:48 GMT: “After an internal discussion we decide to cancel the price [prize – gm] of anthill and my apologies to all developers”

Devs were perplexed as to why high-quality dapps were not getting a look in.

One dev who has built a remittance dapp called instancheque – as opposed to yet another game – got nothing.

Even an app that had previously been praised by Sun –TronGoo –  and which currently has the largest transaction volumes, apparently only received the bottom prize.

This is what Sun tweeted about TronGoo on 9 January:

TronGoo has taken the throne in less than 5 days. A huge congratulations for breaking records and becoming the #1 gaming DApp in volume (#2 in users) across all blockchains. It’s been a pleasure for #TRONArcade to work with developers @WorldWarGoo and @FarmTron on this project. pic.twitter.com/6l3evYJA28

Sun says he is looking in to why TronGoo has been overlooked.

A number of dapp developers also say that their submissions had not even been looked at by the Tron team, claiming they were screened out before being seen by judges.

One of the judges who posts on discord as Vincent – dappreview wrote:

I think they did a screening before sending to judges. I didn’t see all submitted dapps

The list we got is less than 40 dapps, I think it’s for big prize📷

No I don’t have the final results 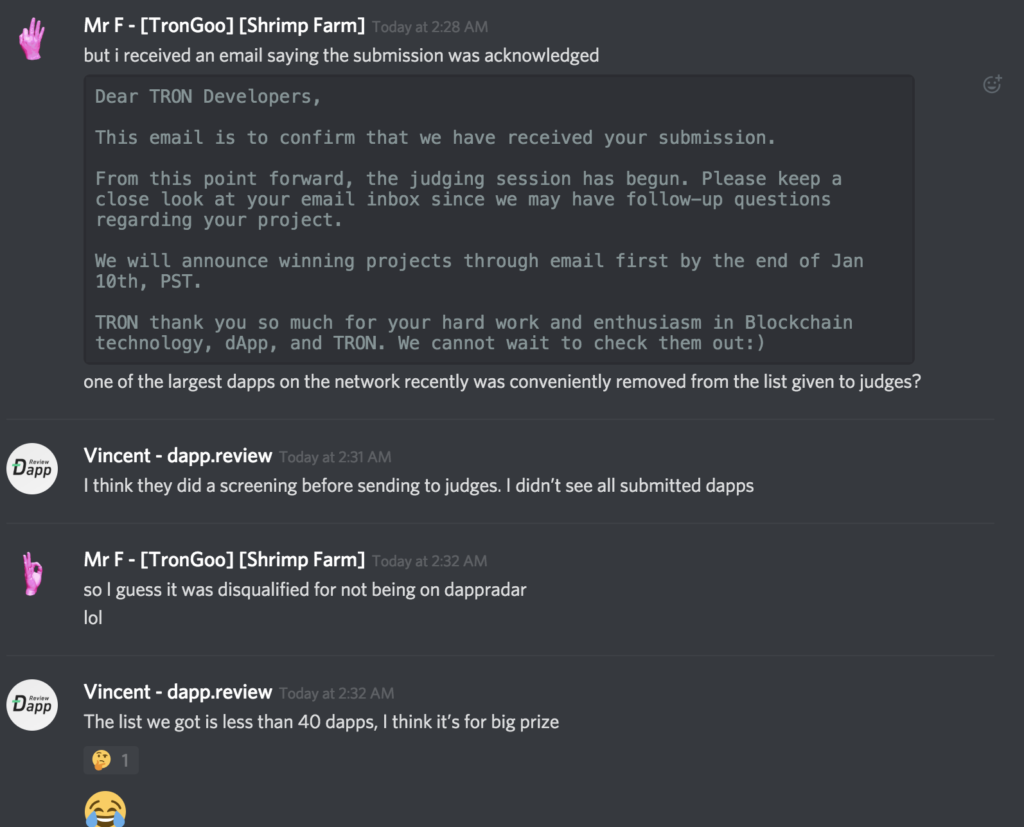 Other devs say their dapps were disqualified with no reason given, such as dapp called TronJoy.

Not enough staff on the job

By way of an explanation for the meltdown of the accelerator competition, Sun said that the company only has one person working on it and was fixing that.

He also admitted he should have visited the discord channel instead of confining himself to his favoured social media channel, Twitter.

Sun is fairly busy on twitter, where he is found of poking fun at Ethereum and co-founder Vitalik Buterin in particular.

A large part of the transaction total was accounted for by betting dapp TronDice.

It is believed the public announcement of winners will take place at the niTROn event taking place next week in San Francisco on 17-18 January.

Simon Morris, previously chief strategy officer at BitTorrent, is disparaging of Tron’s tech, which is derided by its critics as essentially nothing more than a copy of the Ethereum virtual machine, with dPoS bolted on top.

Tron has launched a token for BitTorrent (BTT) but Morris, in an interview with Breakermag, expressed serious doubts about the ability of Tron to deliver the transaction throughput required:

“But what’s very clear is that they’re going to say they’re going in the same direction, come what may, because that’s what Tron does…it’s basically a marketing machine layered on a very thin veneer of technology.”

Crypto market watchers will have noticed that Tron has been outperforming of late. 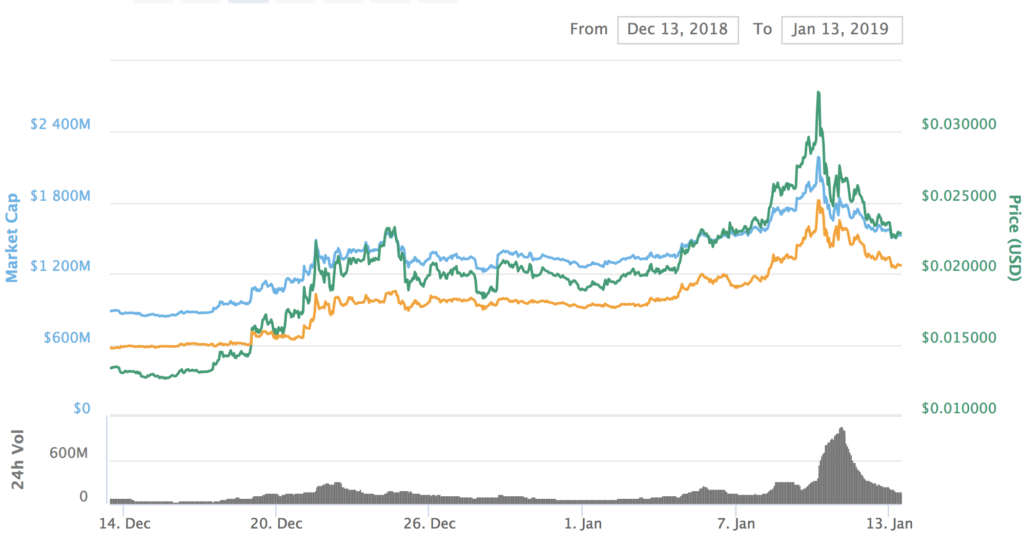 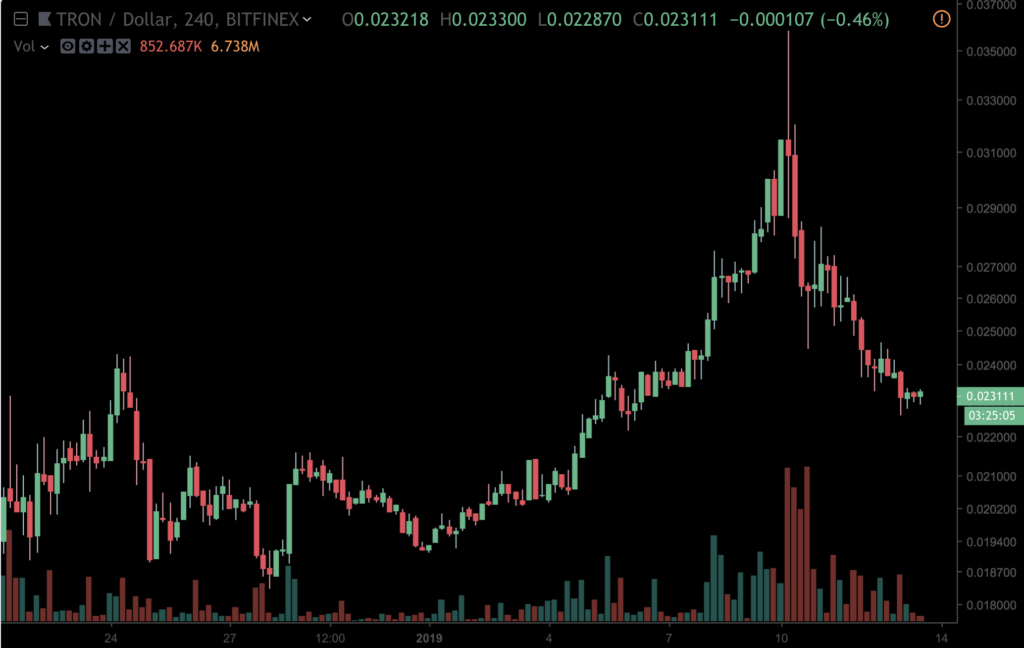 Judging by Justin Sun’s comments on the discord channel, many of the criticisms are being addressed or at the very least there is some sort of damage limitation operation in progress.

Still no statement to devs

However, the statement promised to devs on the discord channel is yet to appear, but we will update this story when it does.

This episode highlights the seemingly amateurish nature of the conduct of leadership teams and the lack of consideration for matters of transparency by many leading projects in the space.

Jimmy Song from Blockchain Capital is not much enamoured by Tron. He predicts the price will drop to 0.001 by 1 February and 0.0005 by 31 December.

However, all those critics who happen to back other projects, be it Ethereum or EOS, may just be having a bout of sour grapes.

The tx numbers presumably don’t lie, but if they are artificially inflated by throwing money at devs only for that support to be subsequently withdraw that support, adoption could presumably plummet.

It got into trouble for plagiarism last year when it was discovered that its whitepaper include source code copied from Filecoin and the InterPlanetary File System (IPFS) in its whitepaper.

Also Sun teased the cryptosphere with hints of a partnership with Chinese internet giant Alibaba which proved not to be the case.

Tron does not seem to be much liked in China either, where it is often the butt of much disdained on Weibo. Given its number 9 position of coinmarketcap, it does not even make it on to the latest semi-official Chinese crypto rankings drawn up by the Centre for Information and Industry Development:

Tron launched its virtual machine at the end of August 2018. In a discord post an hour or so ago, Sun is pleading for time to fix any problems:

luicyjuicy, the dev who posted about the remittance dapp built for Tron, might not be hanging around to find out:

“I see lot of real world use case apps on ethereum and hardly few on tron. The only backdraw [sic] is speed on ethereum but they wil  [sic] solve it”