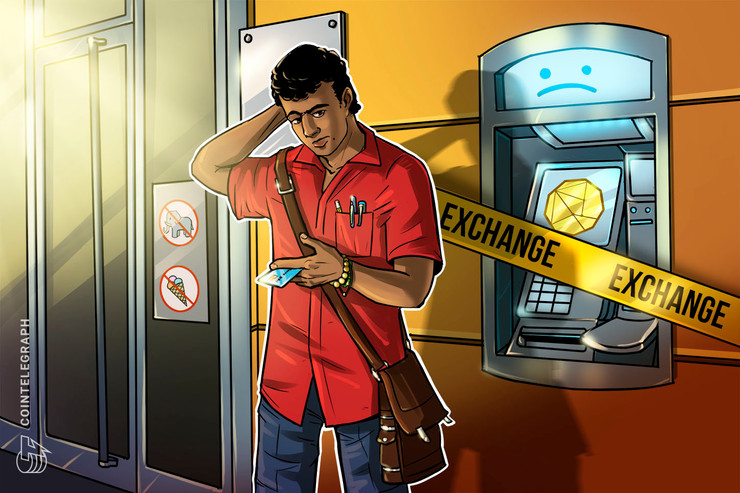 Indian cryptocurrency exchange Coinome has announced it will be halting operations as of May 15, ostensibly due to regulatory difficulties. The development was announced in an official tweet from the exchange on May 9.

As Cointelegraph has reported, exchanges in the country have faced a moratorium on banking services since the central bank, the Reserve Bank of India (RBI), implemented a ban on dealings with crypto businesses last year.

Recent weeks have seen a further shake-up of community sentiment, with local media alleging in late April that various government divisions are considering tabling an absolute ban on crypto in all its forms — although the veracity of the rumors remain contested given other prior reports.

Coinome, which is backed by prominent Indian online payments gateway Billdesk, has not clarified whether the suspension is in effect a total shuttering of services, tweeting only that:

“All crypto markets on Coinome will be suspended, effective 2pm on May 15th, 2019. Customers are requested to withdraw all their crypto assets from Coinome at the earliest.”

Coinome’s difficulties come despite its association with Billdesk, which notably is supervised by RBI, is a participant under the country’s Payments and Settlements Systems Act 2007, and has investments from two of India’s leading public sector banks — State Bank of India and Bank of Baroda.

Since Coinome’s announcement, some local users have been reporting alleged technical  difficulties with withdrawals of bitcoin cash (BCH) and bitcoin SV (BSV).

A May 10 report from local news outlet Quartz cites an alleged Coinome email which has reportedly been sent to customers, apparently providing more details of the recent development:

“India is currently going through uncertainty on crypto guidelines and regulations. The government of India has not yet taken a decision on the regulatory framework for crypto exchanges or wallets. Further, the supreme court is yet to act upon the public interest litigation (PIL) on (the) regulation of crypto assets.”

The status and future of crypto in India remains highly complex. Since the RBI’s controversial prohibition came into effect last July, both public and industry-led petitions have appealed to the courts on the grounds that the decision is unconstitutional. In October 2018, major exchange Zebpay was forced to its doors to its Indian customers due to RBI’s policy.

As the lengthy legal battle continues, this February, the Supreme Court granted four weeks to authorities to come up with crypto regulation policies before the Court would cease hearing crypto-related cases — including parties who demand to reverse the RBI’s crypto circular. This spring, RBI excluded crypto assets from its regulatory sandbox.