Bitcoin and the entire crypto market have been caught within a bout of sideways trading. Both bulls and bears have been unable to garner clear control over the market, which has created a sense of fear amongst investors and traders.

Where Bitcoin trends next may depend somewhat on its reaction to its range boundaries, which sit at $10,200 and $11,200.

Although neither of these levels have been broken as of yet, one analyst is noting that this may be due to BTC currently being trapped within an accumulation phase.

He believes that this will result in a major breakout by the end of 2020.

At the time of writing, Bitcoin is trading up slightly at its current price of $10,600. Bulls have catalyzed some slight upwards momentum today, but it has not altered the crypto’s short-term outlook.

The next key price level to watch in the near-term sits at $11,000, as a break above this level would open the gates for a move up towards its $11,200 resistance.

If it faces another rejection at this level, it could deal some serious damage to its underlying market structure.

Analyst Claims BTC is Poised for a Late-2020 Breakout

While sharing his thoughts on Bitcoin’s macro outlook, one analyst observed that Bitcoin may currently be caught within a re-accumulation phase, which eludes to a possible breakout at the end of the year.

“BTC. I’ve been asked for a bigger picture analysis. Looks like we are in re-accumulation phase, above the weekly 21-EMA. Possible breakout by end 2020,” he said while pointing to the below chart. 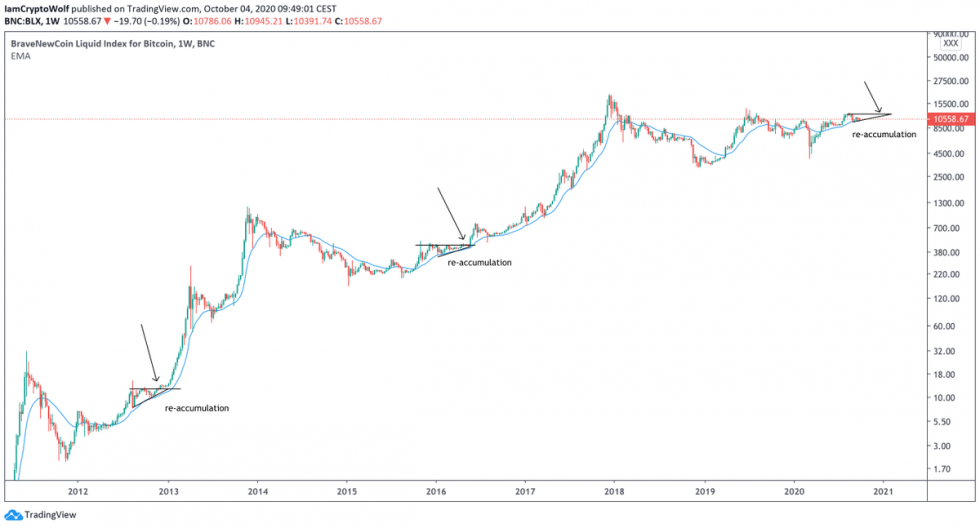 If this potential path forward does come to fruition, Bitcoin could be on the cusp of starting its next macro uptrend.