Google used Chainlink’s features in a showcase implementation to bridge communication between blockchains and cloud-based services. The announcement took LINK to a new all-time high, surging 70 percent within an hour of the release.

Allen Day, a Google Cloud developer advocate, described in a blog post how Chainlink could be used to make BigQuery data available inside an Ethereum smart contract. The integration would reduce blockchain platform risks, mask transactions making them anonymous, and settle speculative bets on prediction marketplaces, such as Augur.

Day revealed that Chainlink’s service also allows for the creation of “oracle,” a mechanism that finds and verifies real-world occurrences and adds this information to the blockchain for use in smart contracts.

“This assembly of components allows a smart contract to take action based on data retrieved from an on-chain query to the internet-hosted data warehouse. At a high level, Ethereum Dapps (i.e. smart contract applications) request data from Chainlink, which in turn retrieves data from a web service built with Google App Engine and BigQuery.”

According to Allen Day, many inefficiencies encountered by developers who are building hybrid applications can be reduced with the implementation of Chainlink services and in some cases new features can be added to Ethereum smart contracts, which in turn allow them to take full advantage of cloud-based services and blockchains.

Shortly after Google’s blog post was published, Chainlink shared the news on Twitter, which lead many investors to speculate that the smart contracts firm had closed a partnership with the search engine giant.

We’re thrilled to share that Google is one of the great companies integrating #Chainlink into their approach to smart contract adoption. Here’s how @GCPcloud users can use Chainlink to connect to BigQuery, one of Google’s most popular cloud services. https://t.co/TfaGPP5TlS

Graham Perich, a software engineer at Airswap, explained that both companies were not joining forces and that the blog post was just part of an update on the recent developments of Google’s Cloud products.

This is just another developer advocate article for Google’s Cloud products. They create hundreds of these to dogfood their various cloud products. They’ve been publishing things like this since April 2018 when they published the BigQuery Ethereum data set. This is way overhyped.

Even though there was no announcement of an official partnership, the news was priced in and Chainlink’s LINK token skyrocketed 74.60 percent within 60 minutes to reach an all-time high of $1.97.

On the 4-hour chart, LINK can be seen trading between the $1.47 support and $1.67 resistance level. A move above resistance could take this cryptocurrency to test the recent high of $1.97, while a break below support could trigger a correction down to $1.27. 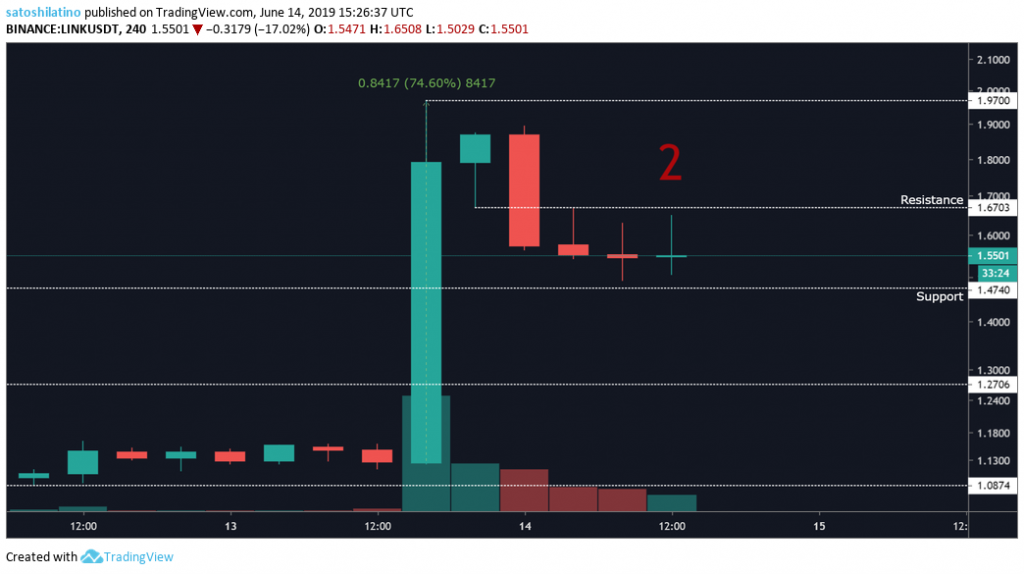 Mainstream adoption is coming into the space

The integration of Chainlink’s technology into Google’s Cloud services is a sign that some of the biggest tech giants around the world are beginning to understand and implement the innovations that many cryptocurrencies are bringing to the tech industry.

Just over a week ago, Apple joined Microsoft and Google’s Android by integrating the Bitcoin (₿) symbol into its devices. In addition, Facebook recently announced that is finalizing its plans to launch its own cryptocurrency, dubbed “GlobalCoin,” which will roll out in 2020, and Ubisoft—the fourth largest publicly traded video game company—is reportedly developing game features on the Ethereum blockchain. The statement is clear that blockchain technology is here to stay.

Like what you see? Get more Chainlink news in your inbox…

Ethereum’s Price is “Convincingly Bearish”: Here’s What Comes After 20% Week