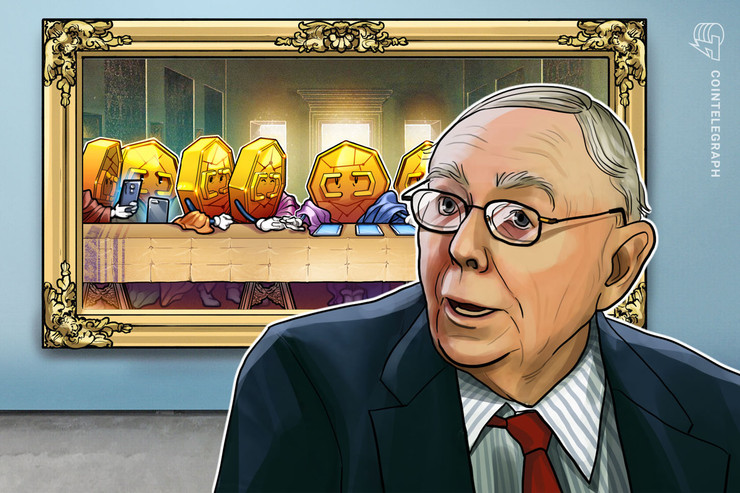 Munger — who was invited to an event by an unnamed digital currency investment group, but did not attend it — stated that bitcoin investors “celebrate the life and work of Judas Iscariot.”

Munger thus reiterated his negative stance towards cryptocurrencies. Last February, Munger described the leading cryptocurrency as “totally asinine,” at the 2018 annual general meeting of the Daily Journal Corporation. He then stated:

“And I think the people who are professional traders that go into trading cryptocurrencies, it is just disgusting. It is like somebody else is trading turds and you decide, ‘I can’t be left out.'”

As Cointelegraph reported earlier today, Berkshire Hathaway’s chief executive officer and chairman Warren Buffett — who is also well-known for his scathing stance toward cryptocurrencies —  again derided bitcoin for its purported lack of real use value. Buffet likened the coin to a seashell that “just sits there.” “It’s like a seashell or something, and that is not an investment to me,” Buffett said.

Last year, Chamath Palihapitiya, a self-professed “disciple” of investors Warren Buffett and Charlie Munger, said that the two crypto skeptics are wrong about bitcoin. Regarding Munger, Palihapitiya said, “I think it’s really unfair to not understand something, and then to disparage it.”

Bitcoin is currently trading at around $5,757, down 0.62% over the past 24 hours, according to CoinMarketCap. As previously reported, on May 3, the price of bitcoin spiked from around $5,300 to over $5,700 in major markets, allowing the crypto market to gain more than $7 billion in a single day.

Gupta Out at ConsenSys Ventures in Shake-Up at Ethereum Startup