In a recent report, Coingape had explained how and why NYDFS rejected BitLicese applied by Bittrex in 2018. However, the report also mentioned NYDFS’s order 60 days time for the exchange to wind up its operation within New York. While regulators released refusal to report on Wednesday, the April 10, addressing Bittrex CEO Bill Shihara – the exchange responded on Thursday, the April 11 via a press release and addressing its customers on social media.

In its response letter, Bittrex expressed its disappointment and argued that the regulator’s decision actually harms than protecting NY customers. Contradictory to regulator’s finding, Bittrex notes that the exchange worked ‘diligently with NYDFS’ and addressed their questions since they first applied for BitLicense.

The blog further reads that;

First, and foremost, we adamantly disagree with NYDFS’ claims and allegations in regard to our anti-money laundering (AML) and compliance practices. Corporate responsibility is in our DNA and our commitment to regulatory and compliance guidelines is second to none. More specifically, today’s letter contains several factual inaccuracies that we feel must be addressed.

Concerning the Bittrex’s capital status addressed by NYDFS, the exchange says that the regulator had imposed ‘capitalization requirements far in excess as compared to other states’. It mentioned that the exchange had provided ‘bond’ to cover the entire capitalizations of all Bittrex’s customers based in New York but ‘still it was rejected’. The exchange also outlined to regulator’s point of Bittrex’s vague account name (In NYDFS’s language – ‘obscene terms and phrases’) – nevertheless, as per the exchange, the mentioned names did not match. It says;

Established in the year 2014, Bittrex is currently holding around $63.5 million trading volume and sits at 54th rank on a graph of Coinmarketcap. All in all, the exchange is restricted to operate a business in New York since the regulator rejected BitLicese – nevertheless, it can resubmit the application in future if it intends to do so.

What do you think, will Bittrex reapply for a BitLicese? Let us know. 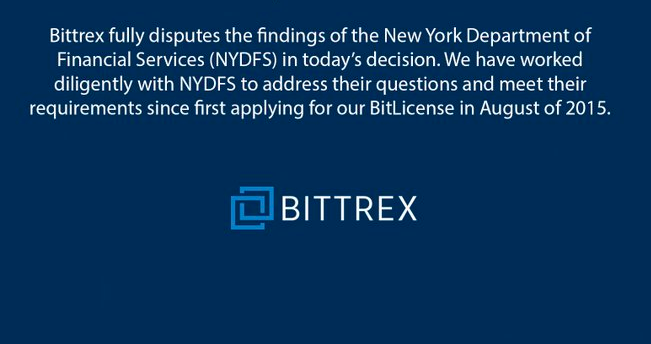 StackOverflow Developer Survey: 80% of Organizations Do Not Use Blockchain