For much of Bitcoin’s 11-year lifespan, it has been laughed off as nothing more than an experiment— a worthless form of “magical internet money” for those on the fringe. But, according to a number of industry commentators, the cryptocurrency’s value proposition was just bolstered with news that a Chinese bank has been subject to what all bankers fear: a bank run.

“Bank run” likely isn’t a term you hear often. It’s often only mentioned in texts outlining the Great Depression of the 1920s and 1930s, during which families rushed to previously safe financial institutions to withdraw their savings. Think back to those articles you’ve read with photos of bank queues of men in trench coats and top hats snaking around street corners.

However, bank runs remain a real and global threat to the fractional reserve banking system—meaning banks have less physical banknotes on hand than the amount of money that their clients deposits—that the world employs today. Hence Bitcoin.

On Oct. 31, the Wall Street Journal revealed that Henan Yichuan Rural Commercial Bank—a rural bank servicing customers in the area around the Chinese city of Luoyang—is in the midst of a bank run. At the time of the report, depositors had rushed to the institution for the third consecutive bank, trying to withdraw everything could in fear of the institution’s demise.

The depositors feared that the bank was on the brink of insolvency after rumors circulated that the bank’s chairman was in hot water. This fear came in spite of the cries of the bank managers, who waved wads of cash in the air, assured that accounts were insured in a bid to calm clients, and asserted that their employer is backed by the Chinese state.

According to Zerohedge, this is the fourth case of a flailing Chinese bank of notable size in the past few months. 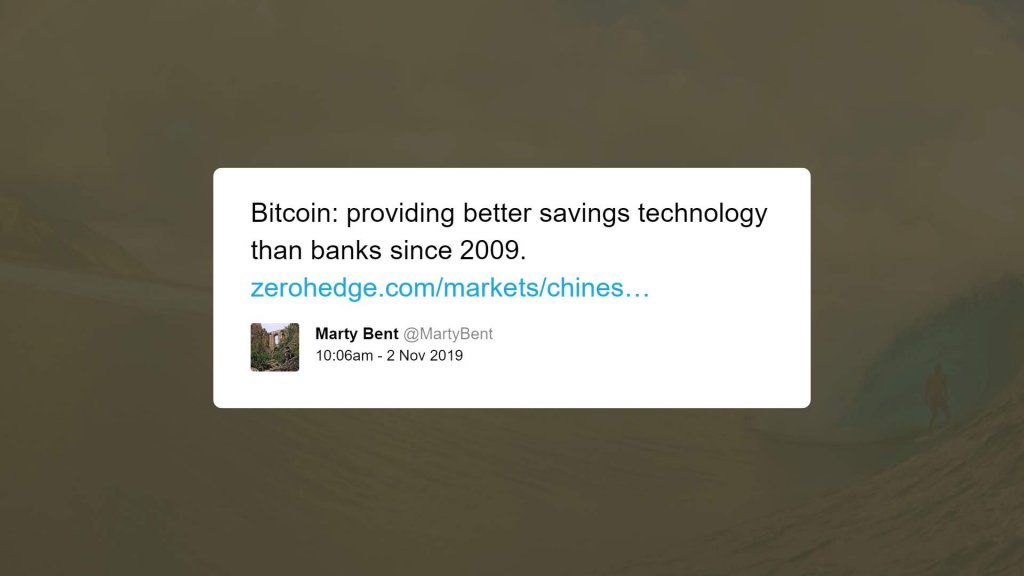 As long as all users keep their own Bitcoin in their own wallets, there can’t be a “Bitcoin bank run,” or government intervention to save “Bitcoin banks” for that matter.

It’s poetic then that Bitcoin’s first block was embedded with the following message outlining the flaws of the leveraged banking system by its pseudonymous creator, Satoshi Nakamoto:

The Times 03/Jan/2009 Chancellor on brink of second bailout for banks.

Short and to the point, Nakamoto illustrated the “why” of Bitcoin in this action of embedding a headline epitomizing the Great Recession into the now-11-year-old project.

While there are no signs that Bitcoin is being used to store value because of this Chinese banking debacle—cryptocurrency trading is vehemently banned in China, after all—there are cases of recent 21st-century bank runs resulting in Bitcoin adoption.

During that time, depositors in the island nation of Cyprus lined up at bank tellers and ATMs for days, trying to withdraw cash as the government mulled over mandatory “haircuts,” billed by some as a “bank bail-in,” on depositors with a certain level of wealth.

Between when Cyprus began discussing haircuts on depositors in mid-March and this CNN article published on Mar. 28 of 2013, BTC surged to $88 from $47. Trading volume also exploded in this time period of two weeks, with BTC volumes reaching 60,000 to 110,000 coins on Mt. Gox—this metric being “double to triple the amount traded” at the start of March.

The seeming reason why BTC nearly doubled and volumes spiked: Bitcoin could not be confiscated by the Cypriot authorities and you knew that if you held the coins in your own wallet, they were your coins, not anybody else’s.