Since mid-February, the bitcoin market has continued to drift upward toward a band of strong, macro resistance (shown below as a red band). This slow, drift upward marks our fourth test of the resistance zone and, unlike the three prior tests, our rejection of the level has shown a weakness on the side of the bears:

If we compare the three prior rejections (labeled 1, 2 and 3), we see that the move into this resistance level was violent — and had equally violent rejections. Our fourth attempt, however, was brought into the level on low volatility and saw a weak rejection.

In addition, we are displaying our first sign of support above a crucial level in our market structure (outlined below in black): 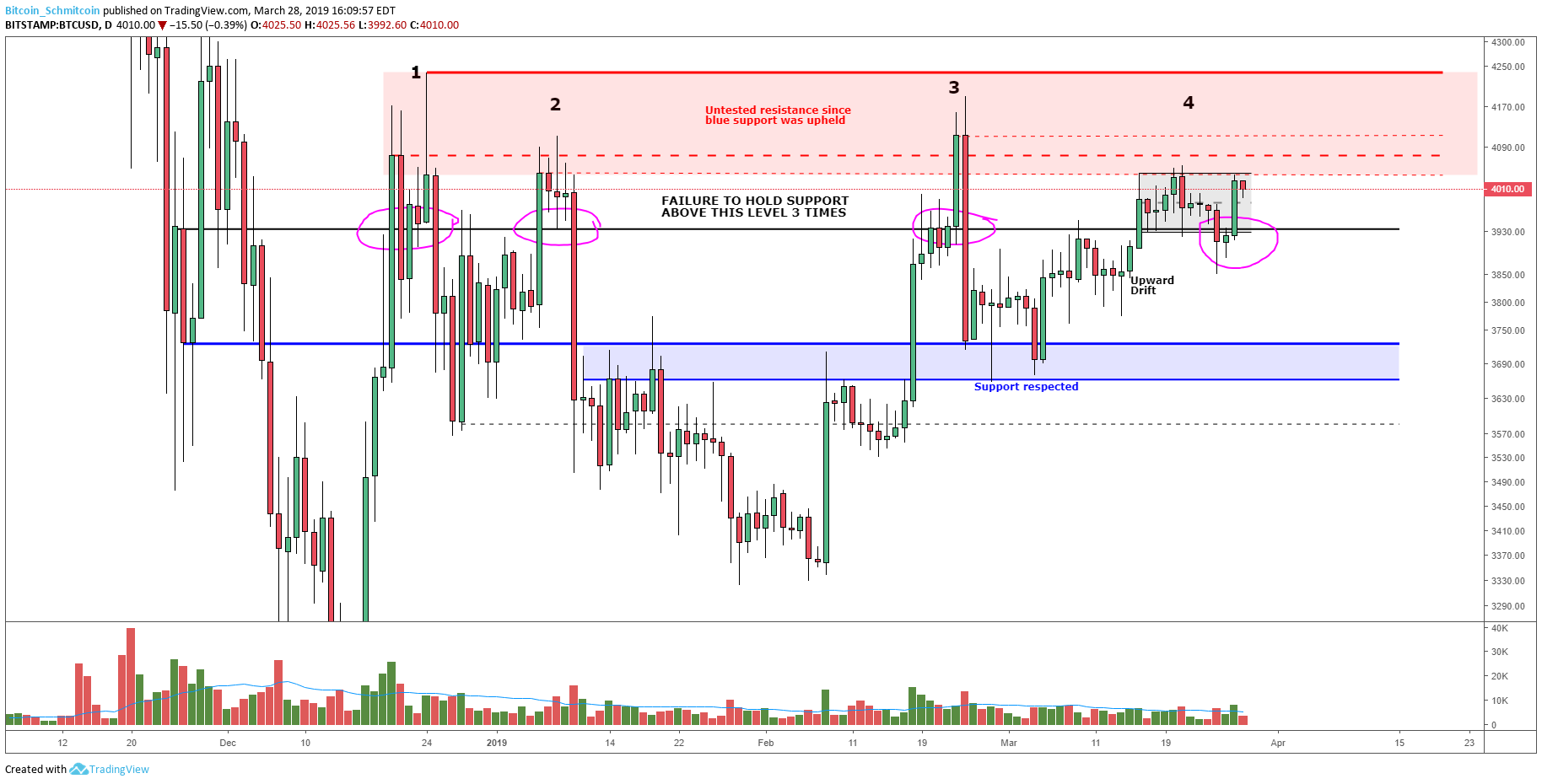 This black, outlined level is significant level as it represents the first macro support/resistance flip at this level. This represents our first time withstanding a rejection of the red zone while maintaining the support of the black level. If we look a bit closer, we can see the formation of what appears to be a reaccumulation trading range that is currently finding support in the upper boundary of the range: 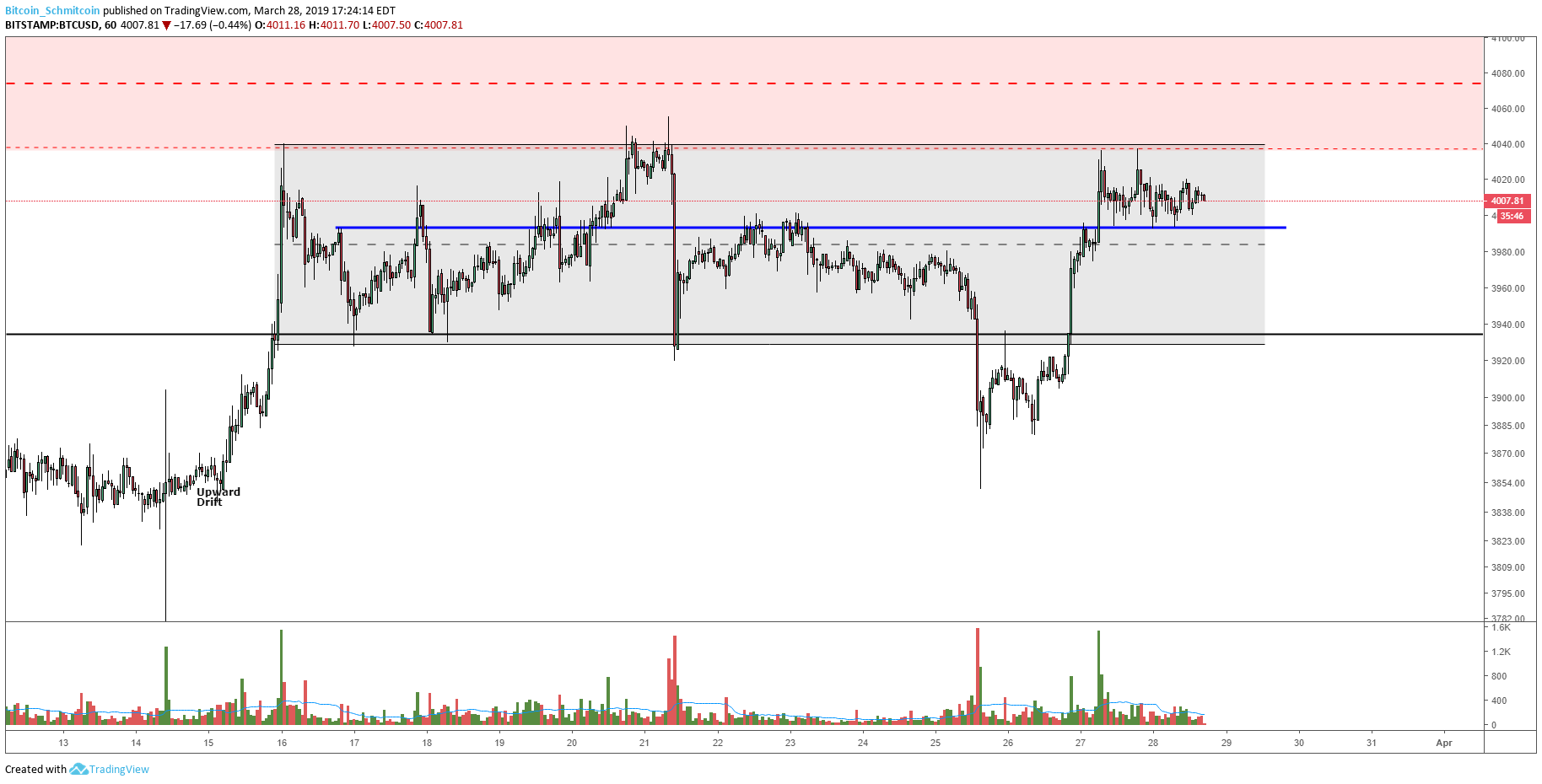 One identifying characteristic of this trading range is the shakeout to the bottom side of the range, followed by a strong, impulsive move to the upside. This impulsive move to the upside represents, once again, a support/resistance flip (outlined in blue). This level previously supplied resistance as the market found itself unable to maintain support every time the market made its way to the top half of the range.

This shakeout into a support/resistance flip is often symptomatic of reaccumulation in the market. Failure to maintain this support would obviously change the market structure, but so long as the hourly time frame maintains its support on this level, the market structure remains bullish. And, considering it’s consolidating right below the red resistance outlined in Figure 1, it puts the bears in an uneasy position.

The fact that we haven’t been completely rejected at this level yet, after our fourth attempt to crack the resistance, is a good sign that supply is exhausting and bears are running out of ammo for the time being. Also, it should be noted that this red level we are testing is a level that could soon put shorters underwater on their positions. If we see a strong test to the upside and manage to push a new high, it is very likely we will see a strong continuation in the upward direction.

For months, the market has stacked short position after short position in a very tight band of prices. If we shove above that band of prices we can expect to see a strong surge of stop losses hit the market in what’s known as a “short squeeze.” A short squeeze is essentially just a cascade of stop losses that close out short positions via a market buy order. As the price pushes further up, the stop losses continue to stop out the next person in line, then the next person in line, and so on, until the bears are finally cleared out of their positions.

This short squeeze idea is all speculation at this point as we have yet to manage to find support on the red band of resistance described in this article — it’s just something to consider as the shorters begin to pile up, yet again, for the fourth time.

Trading and investing in digital assets like bitcoin is highly speculative and comes with many risks. This analysis is for informational purposes and should not be considered investment advice. Statements and financial information on Bitcoin Magazine and BTC Inc sites do not necessarily reflect the opinion of BTC Inc and should not be construed as an endorsement or recommendation to buy, sell or hold. Past performance is not necessarily indicative of future results.