Binance, the largest cryptocurrency exchange in the world, prepares to welcome the first stablecoin developed on the binance (BNB) blockchain while it has begun testing its own.

Stablecoins on the Binance Chain

In a blog post, Stably, a venture-capital backed startup, announced that it will be launching its StableUSD (USDS) token on the binance protocol. Dubbed USDS.B, it will the first stablecoin to launch on Binance DEX allowing other projects under the network to establish transparent and liquid on-chain trading pairs.

Stably has chosen the binance chain to develop its new stablecoin because it provides a vast number of benefits including, “improved security, ease of use, and speed of transaction,” said a representative from the company. These characteristics will allow one-second block confirmation time and several thousand transactions per second.

A sum of 90 billion tokens backed 1:1 with US dollar reserves will be issued, but the entirety of the tokens will be moved into a treasury wallet and the supply will be frozen. Every time there is a freeze or unfreeze of USDS.B, it will be reported under this thread for transparency.

Changpeng Zhao, the founder and CEO of Binance, shared the news while highlighting that the stablecoin was not operated by his firm.

Boom! Welcome the first stable coin @StablyCoin on @binance_dex. And it is not operated by Binance. Early adopters usually rip big benefits when the adopted platform/technology works out. https://t.co/q13n4eupEv

Along the same lines, a twitter account under the pseudonym of CryptosBatman revealed that Binance could be about to launch its own stablecoin, which will be backed by the Great Britain pound (GBD).

It looks like @Binance has issued their Stable Coin $BGBP on Binance Chain!

It’s incredible how fast Binance moves. I can’t say enough how big this is for Binance and Binance Chain.

The news was asserted by Changpeng Zhao, who commented that the project is currently in a testing period and only £200 had been issued.

This is in testing phase still, only £200 minted so far. Slowly, but surely…

Although it is unknown when the stablecoin will be launched, on the binance site the token appears to be named BGBP-CF3, with 200 tokens in supply, and one addresses holder. 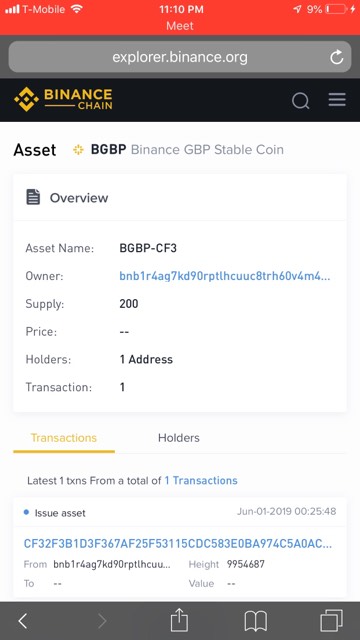 It remains to be seen whether the coin will actually remain stable upon the fluctuations of the market as Jake Greenbaum, the founder of Anon, pointed out the different prices bitcoin has depending on the pairings.

Hopefully we have a stable coin that remains stable.

I wonder what this will do for the value of $BNB. 🤔🙌 pic.twitter.com/F8yCR83ol7

Despite the hack for 7,000 BTC last month Binance has had a successful year so far. From developing its native blockchain to realizing a decentralized exchange and adding margin trading to its platform, the company continues to expand and achieve key milestones describe in its whitepaper.

The confidence that investors have on the firm is rising as it can be perceived in its native currency, binance coin, which has experienced a steady increase in its market valuation going from $4 in early December 2018 all the way up to $35 last month, representing 760 percent gains.

Like what you see? Get more Binance news in your inbox…

Related Topics:Crypto ExchangescryptoslateRumorsStablecoinstcrTCRNewsthecryptoreport
Up Next