47 days before the 2015 block rewards reduction, Litecoin’s declined by 70 percent following a 590 percent surge. Now, only 45 days away from this year’s halving and up 540 percent, LTC is showing signs that a correction is underway.

Every four years after 840,000 blocks are mined, Litecoin goes through a fixed process called halving that reduces the rewards miners get for mining blocks by 50 percent. Consequently, the inflation rate of the cryptocurrency is also reduced.

This event is set to happen until the total supply of 84,000,000 LTC are mined. It is unknown when the last few coins will be mined, but it will be around 2142 based on the current rewards schedule. By then, approximately 0.00000672 LTC will be mined each day until eventually, all the tokens are in circulation.

Litecoin went live on Oct. 13, 2011, and since then it has only had one block reward reduction event. The first halving occurred on Aug. 26, 2015, at a block height of 840,000, which dropped the mining reward from 50 LTC per block to 25 LTC. The halving had a direct impact on the value of the cryptocurrency.

Following the low of $1.30 on April 26, 2015, LTC went through a consolidation phase that lasted almost a month, where it was trading between $1.35 and $1.50. On May 22, the market valuation of this cryptocurrency broke out and within a month and a half it reached $8.97, which represented a 590 percent upward move.

On July 9, 47 days prior the halving, LTC reached its peak and began a 73.2 percent correction. It went down from a high of $8.97 to trade at $2.40 just one day before the halving occurred. Litecoin basically spent the following months staggering between $2.87 and $3.24. 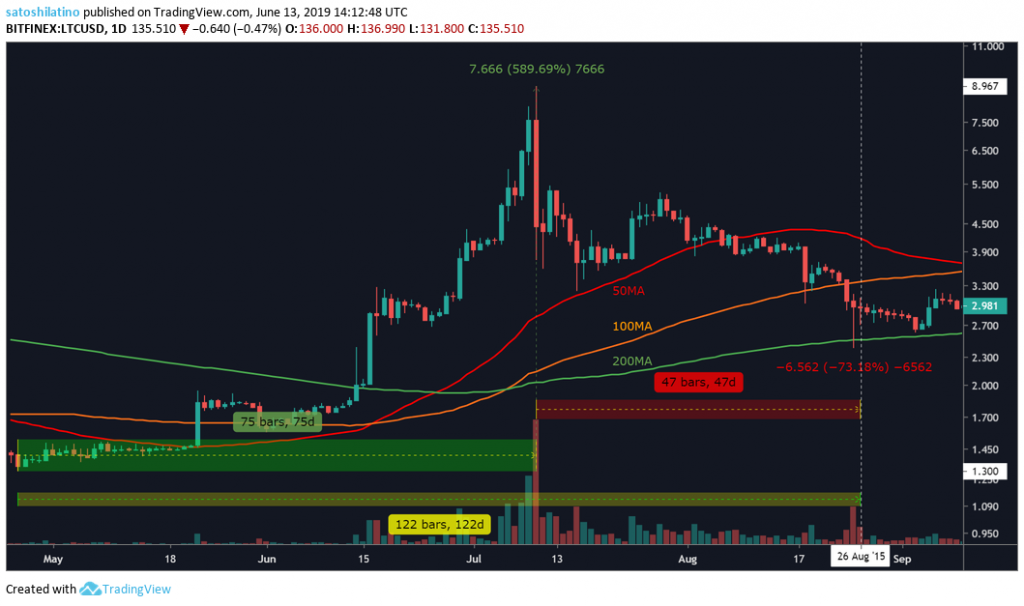 Now, that the block rewards reduction is just 54 days away from today, Litecoin seems like it has or it will reach its peak. If history repeats itself, LTC could soon pullback to the 200-day moving average just as it did in 2015. If it does, a 56.94 correction will take place dragging its price down from the recent high of $144 all the way to $62. 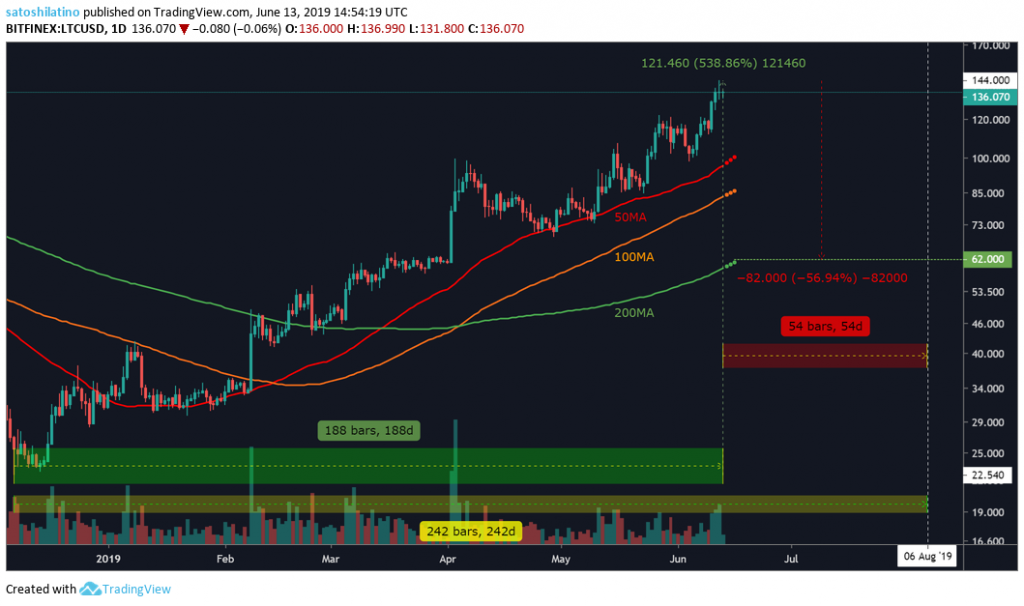 Is it time to short Litecoin?

The current market structure is completely different compared to 2015. Financial institutions have joined the space and regulation has stepped in, which has helped the cryptocurrency industry mature. Nonetheless, the market is still mostly based upon sentiment and not fundamentals which allow many cryptocurrencies to surge without any deep-rooted reason.

After an approximately 540 percent rise, it is hard to say that Litecoin will continue going up without pulling back, but due to the nature of the market it is worth noting that it could. As the halving event approaches, many investors might take the date as a “take profit” event that could indeed provoke a correction in the market valuation of this cryptocurrency.

Circle to discontinue its bitcoin enabled payment and wallet app