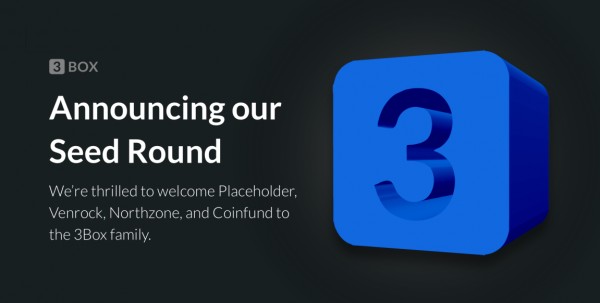 Seed round led by Brad Burnham, founder of Union Square Ventures and Placeholder, to put online data back in users’ control

NEW YORK, June 27, 2019 (Newswire.com) – 3Box, makers of decentralized identity and data storage infrastructure, have closed a $2.5 million seed financing round led by Placeholder Ventures to reinvent the way applications handle user data online. Venrock, Northzone and CoinFund also participated in the round. 3Box was previously funded and incubated by Ethereum product developer ConsenSys and graduated from its venture production studio earlier this spring.

In today’s digital climate, many companies don’t want to manage user data. 3Box makes it easy for developers to build secure, engaging applications while eliminating the need and liability associated with storing user data on a centralized server. Instead, 3Box developers can store data directly with users where it is more secure and easily portable across different services. To begin, 3Box is offering a decentralized storage network along with a suite of developer APIs for user profiles, content storage and messaging.

“3Box is central to realizing the vision of a better internet for all. Developers get user data security with near-zero overhead and the added benefit of improved onboarding, while users are empowered with greater agency over their privacy and interactions online. This model of application development will usher in a new wave of empowering digital services that work for, not against, the user,” says Joel Thorstensson, co-founder and CTO of 3Box.

The market has quickly taken notice. Since October, the team has earned more than 15,000 developer installs of its software and now counts some of the most well-respected projects in the Ethereum ecosystem – ConsenSys, Aragon, MetaMask, Portis, Giveth, Livepeer, MolochDAO, FOAM and others – among its most supportive customers and advocates.

The team will use the fresh funding to grow in NYC and Berlin while continuing to focus development efforts on decentralizing the 3Box network protocol and enhancing existing offerings. Additionally, the team plans to improve the developer experience and expand support for more use cases beyond Ethereum web dapps to all online applications.

“Today, our customers are primarily Web3 developers building decentralized applications on Ethereum with minimal backend infrastructure,” says Michael Sena, co-founder and CEO of 3Box. “But we believe the market for self-sovereign identity and data is much bigger than just Web3. By storing user data on 3Box, all types of applications can embrace a more lightweight design. Digital service providers can now reliably deliver on promises of data security and privacy without compromising the familiar experiences that mainstream users have come to expect from their favorite apps.”

As a result of the fundraise, Brad Burnham, co-founder of Placeholder Ventures and Union Square Ventures, will join the 3Box Board of Directors. Mr. Burnham has experience supporting successful technology businesses across relevant industries including privacy software (DuckDuckGo), developer tools (StackOverflow) and cloud infrastructure (CloudFlare). He joins Mike Kriak, former COO and CFO of Mashable and current global lead of the media and advertising vertical at ConsenSys, on the 3Box board.

“We couldn’t be more excited to welcome our new investment partners Brad Burnham, David Pakman, Jake Brukhman and Wendy Schadeck to the 3Box team,” says Danny Zuckerman, co-founder and COO of 3Box. “They each bring expertise and passion to our mission and we’re excited about what they will contribute to 3Box as we grow during this next phase and into the future.”​

For the company’s full set of products, information on how to partner and current job listings, visit 3Box.io. The team can be reached for comments or questions at community@3box.io.

MORE ABOUT 3BOX
3Box is a self-sovereign identity and distributed data storage infrastructure company founded in October 2018 and led by former ConsenSys, uPort, Bain and Ideo employees. 3Box offers a decentralized user data storage network and a JavaScript SDK with APIs for profiles, storage and messaging. 3Box is headquartered in New York City and Berlin.

10 Best Cryptocurrency Exchanges In The World To Buy Any Altcoins